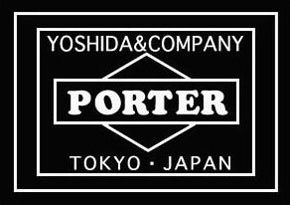 "Porter" is a person who carries customers' luggage at a hotel, etc., and since he/she knows the goodness of bags well, Yoshida Kaban decided the brand name and released the brand "Porter" in 1962. Based on the spirit and skills of Japanese craftspersonship in "a needle in a soul" the high quality, functional yet simple design of Porter bag and wallet is loved by men and women of all ages.

Yoshida Kaban (Kaban means Bag in Japanese) is a bag manufacturer with over 80 years of history. Kichizo Yoshida founded "Yoshida Kaban" in 1935. Kichizo is a bag craftsman himself.

If you use a bag for a long time, there will be something wrong with it and it will need to be repaired. As they looks at the bag, they can see which studio made the Yoshida bag, so they repair it there, original studio where the bag was manufactured. By doing so, the craftspersons themselves can analyze the weak parts and they will make use of them in the future products. It's a key that Yoshida Bag keep improving their quality.